Revman International, which got its start in 1988, is a provider of high fashion home furnishing goods. Revman markets products under its own brands such as Stone Cottage, Nine Palms, and Azalea Skye, and has grown to include a portfolio of designer brands and fashion products for bed and bath.

The company also develops private label collections for major retailers such as Kohls, Walmart, and Bed Bath & Beyond. Headquartered in the iconic Empire State Building in New York City, Revman has become a global brand trusted by retailers worldwide. Revman’s approach to developing its products through outsourcing has enabled the company to produce high quality goods at competitive prices.

In order to maximize their global resources, in 2008 Revman deployed Manhattan Associate’s SCALE (Supply Chain Architected for Logistics Execution) Warehouse Management Software to manage their supply chain. Through SCALE, Revman has been able to manage the high volume of goods they receive and ship world-wide.

Due to the expansion of ecommerce retail, Revman’s international vendor partners needed to increase drop shipping. To support their partners, Revman physically printed and mailed stacks of retail compliance labels for the vendors to affix to the drop shipped cartons. At first this worked well, but as their vendor community grew from a handful to dozens of manufacturing partners worldwide, Revman found themselves printing and shipping large batches of labels which was time consuming and expensive.

According to Austin Bruce, IT Manager at Revman, “We were shipping out hundreds of thousands of 4 x 6 shipping labels each year to dozens of manufacturing partners. Eventually we reached a point at which we had over 35 different label formats to maintain.” He continues: “The labels were programmed in raw ZPL code for our thermal bar code printers. Any time we needed to modify a label, or add a new one, our programmers would have to make edits to the long strings of code. This required lots of complicated coding, as well as testing each label – pixel by pixel.” The challenge was twofold. First, Revman had to send their compliance labels to their global partners in a more efficient and cost-effective manner. Secondly, they needed to be less dependent on dedicated programming resources for creating new labels and modifying existing labels. Revman resolved to find a way to take control of their labeling process.

At the Manhattan Momentum customer conference in May 2018, the Revman team met with CYBRA MarkMagic representatives. The Revman professionals explained their issues to the MarkMagic team. CYBRA and Revman supply chain experts put their heads together to design a new solution to simplify Revman’s labeling processes, improve responsiveness, and reduce the cost and labor required to support international shipping of goods.

CYBRA’s MarkMagic Bar Code Label Software offered a number of features that directly led to improvements to Revman’s SCALE system labeling. The normally daunting project of turning ZPL labels into user editable formats is typically a long, complex process. But not for MarkMagic. CYBRA’s support team leveraged MarkMagic’s proprietary Print Stream Importer which is a proprietary tool that converts label output print streams (in this case Zebra’s ZPL code) into user editable MarkMagic formats. In just minutes, Revman had over 35 SCALE label formats that they could edit (and design new ones) without writing any code.

A major benefit of the new label process for Revman came in the form of MarkMagic’s ability to output to virtually any print device or create a PDF file. Instead of printing thousands of shipping labels and distributing them to international partner locations, Revman creates PDF files of shipping labels using MarkMagic’s PDF/Email/Fax Add-on. The PDF label files are then emailed to Revman’s manufacturing partners worldwide. Emailing a several thousand page PDF file to each vendor is accomplished in a matter of seconds as opposed to the previous practice of printing and shipping stacks of physical labels all over the world.

To automate the process, Revman added one SQL Statement to the SCALE Wave Flow Sequence to integrate the MarkMagic print process. To dynamically manage printing processes via user rules instead of custom coding, Revman chose the MarkMagic Add-on option, PrintTransformer. A PrintTransformer rule names the PDF output file using variable data from the SCALE WAVE data. Another rule concatenates the SCALE Wave# and WorkUnit# and creates separate PDF files when either field value changes. Yet another PrintTransformer rule saves the PDF files to a network share and emails the files to vendors.

To simplify the process even further, the Revman team enabled the MarkMagic PrintMonitor Add-on option. PrintMonitor watches the Wave folder, and as each file is added, a label job is automatically kicked off. This was all accomplished with no programming. 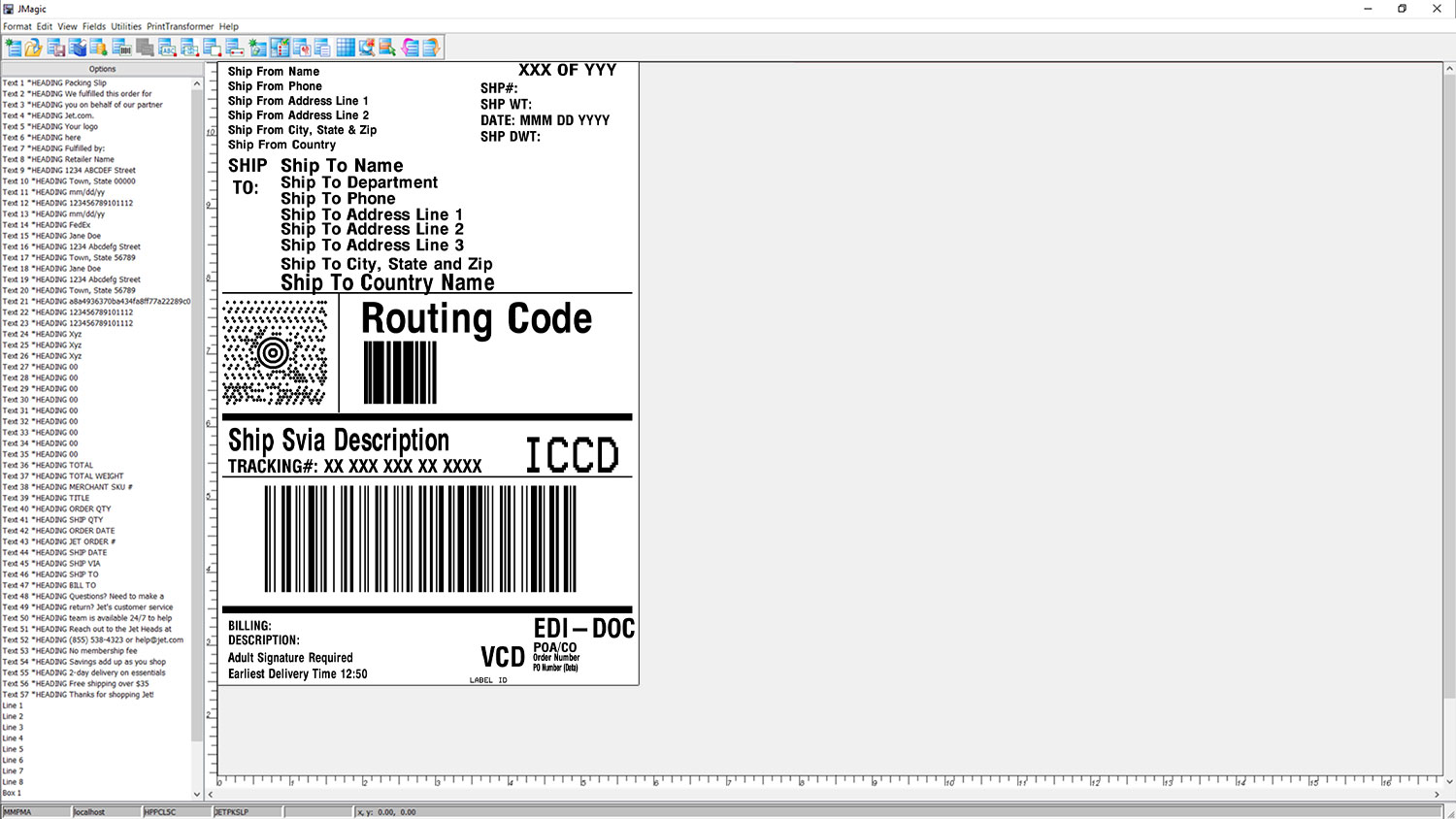 Using a number of MarkMagic features, Revman has achieved its goal of significant cost and time savings, as well as a streamlined shipping process. Ongoing label maintenance effort has been reduced by approximately 95%. The new procedure of emailing PDF label files to manufacturing partners has resulted in significant cost savings for Revman on label shipping charges. It has also eliminated the lag time for shipping goods from overseas. Revman’s investment in MarkMagic paid for itself in under six weeks and continues to pay dividends.

Along with cost savings, Revman enjoys the benefits of a simplified label maintenance process. With MarkMagic’s intuitive visual designer, non-technical staff members can edit existing labels and create and test new labels quickly and easily. This sure beats tasking a programmer with the painstaking project of editing native Zebra printer ZPL code. Changes can be applied effortlessly, and tested in seconds. Label changes and additions are no longer dependent on dedicated SCALE resources. MarkMagic has given Revman label printing independence.

The project has been a success not just for Revman, but also their international partners. It only takes a few seconds to produce the PDF label files that are sent all over the world. Vendors no longer have to wait for their labels, and can reprint selected labels as needed. Vendors are no longer limited to using Zebra printers exclusively. They now have the freedom to choose from a wide range of supported printers that best fit their needs. Optimized MarkMagic print drivers create PDF files that are compact and searchable. These high performance MarkMagic PDF files can be conveniently print, sent, saved, and archived.

And there are more benefits to come. Revman is ready to further enhance its supply chain by printing their own on-premise labels with MarkMagic. Doing so will allow them to better maintain the more than three million internal labels that ship from Revman’s domestic warehouse annually. Beyond labels, Revman plans to use MarkMagic to create and print forms such as packing slips and bills of lading. Should Revman choose to migrate to Manhattan Associates SCALE Active cloud implementation, web-based MarkMagic is ready for the journey. “We’re excited to see where else MarkMagic can fit into our plans,” concludes Revman’s IT Manager, Austin Bruce. With the flexibility and efficiency of MarkMagic’s printing tools, Revman and its vendors have streamlined their supply chain fulfillment operations putting them in excellent shape for future growth.

This home furnishings manufacturer can rest easy. According to CYBRA VP of Operations, Chuck Roskow, “A typical SCALE customer has a collection of SCALE .lbl ZPL files for which they have invested substantial resources to modify and certify over the years. In no time at all, any SCALE .lbl ZPL file can be imported to MarkMagic and printed on any of the hundreds of MarkMagic supported printer types or output as a PDF file. Add the intuitive designer, and MarkMagic options such as PrintTransformer and PrintMonitor, and the Manhattan SCALE label generation process becomes even more responsive to ever changing customer requirements.” Revman’s successful integration of MarkMagic with SCALE has proven this.